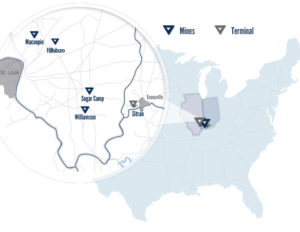 On March 10, Illinois Basin coal producer Foresight Energy and all of its subsidiaries filed for bankruptcy. The company entered into a Restructuring Support Agreement (RSA) with ad hoc lender groups holding more than 73% of the approximately $1.4 billion in claims under each of the company’s first lien credit agreement and second lien notes.

Foresight Energy filed in the Bankruptcy Court for the Eastern District of Missouri, which also included voluntary petitions for all of Foresight’s subsidiaries, including those operating the Williamson, Sugar Camp, Hillsboro operations and the Sitran River Terminal.

Foresight will finance its operations throughout Chapter 11 with cash on hand and access to a $100 million new money debtor-in-possession financing facility, subject to bankruptcy court approval. The company said lenders have committed to provide the full amount of the DIP Facility. This will be used to support ordinary operations and payments to employees and suppliers throughout the restructuring process.

Foresight Energy Chairman, President and CEO Robert D. Moore said, “We appreciate the support of our lenders, many of whom have been invested with the partnership for a long time. As we enter this process, I am confident the DIP Facility provides the partnership with adequate liquidity to get payments to our valued trade partners and continue operating in the normal course of business without any anticipated impact to production levels.”

The company filed first day motions with the court and when they are granted, will be able to continue with day-to-day operations uninterrupted.

Milbank LLP is acting as legal counsel and Perella Weinberg Partners LP is acting as investment banker to the Ad Hoc Lender Group representing crossover lenders under each of the second lien indenture and first lien credit agreement.