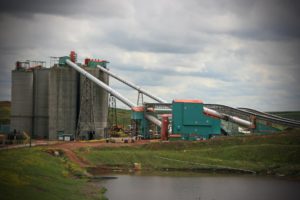 On October 2, as part of the bankruptcy proceedings for Blackjewel LLC, Blackjewel Holdings LLC and certain affiliated entities, the U.S. Bankruptcy Court for the Southern District of West Virginia approved the sale.

ESM will operate the mines during the transfer process of certain state permits held by Contura Coal West and certain state and federal leases held by an affiliate of Blackjewel. ESM has agreed to use commercially reasonable efforts to cause the permits to be transferred as promptly as possible.

“Closing this deal with ESM brings about a positive result for our company and the many stakeholders involved in this transaction,” Chairman and CEO David Stetson said. “In our view, this transaction represents a best-case-scenario outcome to a lengthy and uncertain process, putting the mines in the hands of an operator with a long-term interest in the PRB, and getting hard-working coal miners back on the job.”

Contura was a prior owner of the Western assets through its subsidiary, Contura Coal West, though the company has not operated the mines since selling the assets to Blackjewel in December 2017. Because the permit transfer process relating to that transaction was not completed prior to Blackjewel’s filing for Chapter 11 bankruptcy protection, however, Contura Coal West remains the permitholder in good standing for both mines and has maintained bonding to cover related reclamation and other obligations.

Contura paid cash consideration to ESM of $81.3 million at closing and has agreed to pay an additional $8.7 million into an escrow account to be used to make payments in respect to a federal royalty claim against Contura Coal West, and has also agreed to convey certain Wyoming real property to ESM subject to certain conditions. It has also paid $13.5 million to Campbell County, Wyoming, for ad valorem back taxes, has waived its rights to the remaining $3.05 million of a purchase deposit provided to the debtors, and has released or waived certain other claims against the debtors or with respect to certain of their assets. ESM has agreed to indemnify Contura and its affiliates against all reclamation liabilities related and against federal, state and local claims for royalties, ad valorem taxes and other amounts relating to the Western assets for the period beginning on December 8, 2017.