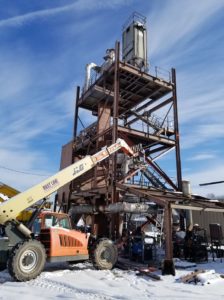 CONSOL Energy recently acquired a 25% stake in CFOAM Corp. for $3.5 million. The company also provided a $1.1-million-term loan to CFOAM LLC for working capital and invested another $400,000 to acquire a first lien note, bringing the total value of the transaction to $5 million.

CFOAM LLC manufactures inorganic carbon material from coal, pitch or lignin feedstock. They have a rigid foam structure, similar in appearance to pumice stone, but with entirely different properties, which are currently used across a wide variety of markets, including composite tooling for the aerospace sector, energy-absorbing applications and defense applications, according to the company. Additional markets such as automotive applications for energy absorption and fire resistance are also expected to become significant to the CFOAM over time.

“This is our first major step in the coal-to-products area, which leverages certain attractive properties of coal, but with significantly lower emissions and greater value uplift potential than conventional combustion applications,” President and CEO of CONSOL Energy Jimmy Brock said. “These products not only provide a high-margin revenue stream, but also provide an intriguing new opportunity to utilize the vast resource base that our country is endowed with.”

He added that the total addressable market for CFOAM’s products is more than $15 billion annually.

“We are very excited to partner with CONSOL Energy,” President and CEO of CFOAM Flemming Bjoernslev said. “This investment and collaboration will offer the technical support and business acumen CONSOL Energy has demonstrated for decades and will enable CFOAM to advance as a reliable partner in the material science industry.”

CONSOL Energy said it is pursuing alternative uses of coal in three different areas. The company is partnering on a Department of Energy-funded project with Ohio University and other industry partners to develop coal plastic composites that are geared toward the engineered composite decking and other building products markets.

In addition, CONSOL has partnered with OMNIS Bailey LLC to develop a refinery that will convert waste coal slurry into two products: a high-quality carbon product that can be used as fuel or as a feedstock for other higher-value applications, and a mineral matter product that has potential to be used as a soil amendment in agricultural applications.

Australian Pacific Gets Approval to Restart Dartbrook Coal Mine