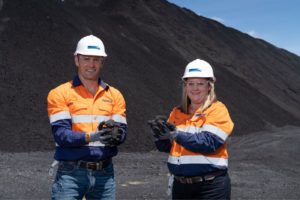 The first shipment of high-quality coal from the Carmichael mine has been assembled at the North Queensland Export Terminal (NQXT) in Bowen ready for export as planned. Bravus Mining & Resources CEO David Boshoff said the project had successfully delivered coal for the first coal shipment to NQXT during the testing and commissioning of Bowen Rail Company’s new trains.

The coal will now be loaded and dispatched according to NQXT’s normal operations and subject to the port’s shipping schedule.

“This is a big moment for everyone who has worked so diligently and passionately to build this mine and its world-class supporting civil and commercial infrastructure,” Boshoff said. “From day one, the objectives of the Carmichael Project were to supply high-quality Queensland coal to nations determined to lift millions of their citizens out of energy poverty, and to create local jobs and economic prosperity in Queensland communities in the process.”

Boshoff said the Carmichael Project had provided more than 2,600 direct jobs and paid more than $1 billion to regional Queensland contractors and businesses since construction began.

“High-quality Australian coal will have a role to play, alongside renewables, for decades to come as part of an energy mix that delivers reliable and affordable power with reduced emissions intensity,” he said. “That’s why Carmichael makes sense, and why, as a group, Adani is also heavily investing in renewables.”

Bravus has secured the market for the 10 million metric tons per year of coal that will be produced at the Carmichael Mine.

The coal will be sold to customers in the Asia-Pacific region at index adjusted pricing, which means all taxes and royalties will be paid here in Australia.

Carmichael coal is high-quality 5,000 kcal/kg coal with low sulphur, low trace elements and low ash, which will meet the import requirements of key developing markets in the Asia-Pacific region.

Production Halts at Donkin Coal Mine