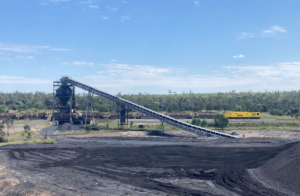 Australia’s Bowen Coking Coal Ltd. has railed its first coal from the Broadmeadow East mine (BME) through to Dalrymple Bay Coal Terminal (DBCT), near Mackay, in a move the company says further cements it as Queensland’s next independent coal producer.

BME is the first pit to come online as part of BCB’s greater Burton Complex, in Queensland’s Bowen Basin. It is the company’s second operating mine, following first production and sales from the Bluff mine in June 2022. Coal production commenced at the BME pit in July this year and is expected to ramp up to steady-state production of between 800,000 metric tons per year (mt/y) and 1.1 million mt/y Run-of-Mine (ROM) in the next quarter.

The train containing 10,426 mt of has been sold under a spot arrangement with the company’s 50:50 marketing joint venture with M Resources. A further three trains (approximately 30,000 mt) of BME coal are scheduled to be railed to DBCT soon. Initial sales are being completed on a train-by-train basis through Fitzroy’s Carborough Downs facilities during the ramp-up phase while the company’s train loadout facility at the Burton Complex is being refurbished. Bowen recently announced it is planning a maiden Cape size vessel (140,000 mt) of BME coal for late December 2022 in addition to the above-noted trains.

Bowen Managing Director and CEO Gerhard Redelinghuys, said the shipment of Bowen’s first coal from BME was yet another significant achievement for the company. “Having two mines producing in different parts of the Bowen Basin and using alternative infrastructure, spreads risk brought on by the unseasonal wet weather,” he said. “It also demonstrates the company’s technical ability by bringing two mines into production in one year, while simultaneously refurbishing the Burton Complex. I would like to thank the whole Bowen team, alongside our valued consultants, contractors and infrastructure partners, who all played an important role in turning BME from what was essentially a paddock in May this year into a revenue-generating operation within just five months. It is a marvelous achievement for the company, demonstrating our ability to move quickly and overcome obstacles as we ramp up to our production target of 5 million mt/y ROM by 2024.”