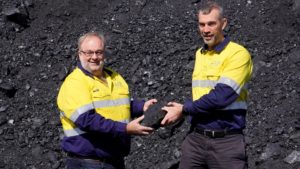 Bowen Managing Director and CEO Gerhard Redelinghuys said the shipment of Bowen’s first coal was a significant achievement for the company as it transitions into a coal producer, creating hundreds of jobs and paying significant royalties to fund services for all Queenslanders while supplying a critical steel making material to the world.

“Following our first shipment from Bluff, we will see our production start to ramp up quickly,” Redelinghuys said. “Further sales from Bluff have been committed for August and September as we see this mine achieving steady state production later in this quarter.”

The company will ramp up the production target of 5 million metric tons per year (mt/y) by 2024. “We are making great progress at Broadmeadow East, the first of the enlarged Burton complex pits, with first coal mining also expected this quarter,” Redelinghuys said.

The Bluff mine was acquired by Bowen in December 2021 and significant preparation works were undertaken prior to first coal being mined in April under a contract with HSE Mining. An additional 3600-mt digger (the third machine on site) has now been mobilized as support to remove overburden for the pit extension toward the south.

Coal production at Bluff mine is now expected to ramp up to a steady state run-of-mine (ROM) target of 80,000 mt to 100,000 mt per month by the end of next month, representing an annualized production rate of between 1 million mt/y and 1.2 million mt/y ROM over four to six years to supply the global steel industry.

In related news, Bowen Coking Coal has completed the acquisition of 100% of the shares in New Lenton Coal Pty Ltd., which currently owns a 90% interest in the Lenton joint venture.

The transaction, originally announced in August 2021, represents a transformational acquisition for Bowen. The Lenton joint venture features the Burton Mine and Lenton Project as well as the existing Burton plant and infrastructure, which is strategically located in close proximity to existing Bowen assets and will have total processing capacity of up to 5 million mt/y.

“The acquisition of New Lenton marks another important milestone for Bowen as we continue our emergence as the next significant mining company in the Bowen Basin,” Executive Chairman Nick Jorss said. “The Burton mine has a proven track record and has produced a coking coal brand that is known for its high quality, low ash and low sulphur.”