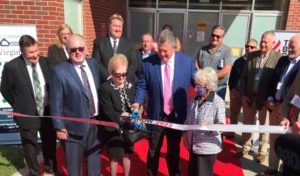 After a 1-year postponement, the Bluefield Coal & Mining Show kicked off this week at the Brushfork Armory in Bluefield, West Virginia. The theme for this year’s coal show is “A Show for Mining: Our Past, Present, Future.” The event caters to regional coal operators, who mostly cut coal from underground operations. Many manufacturers displayed low-profile equipment for room-and-pillar mining in low coal seams. As many as 6,000 people are expected to attend the 3-day event.

The show started Wednesday morning, September 14, with breakfast for exhibitors and the media. Alpha Metallurgical Resources Chairman and CEO David Stetson delivered the Keynote Address. He talked about the value of metallurgical coal to the region. He also explained how the company had used the profits from high met coal prices to reinvest in operations and training for new miners, as well as paying down debt and buying back company shares.

Chris Hamilton, president of the West Virginia Coal Association, and a group of dignitaries cut the ribbon to open the show. Before cutting the ribbon, he offered some choice words about West Virginia Senator Joe Manchin and the so-called Inflation Reduction Action (IRA). He said the coal industry needs to understand that the IRA will cause significant harm over time and he encouraged people to become more active in the War Against Coal.

Foresight to permanently close Deer Run longwall mine in Illinois