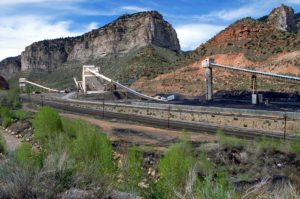 The DOI says coal mining on federal lands accounts for 40% of the nation’s coal. (Photo: BLM)

On February 26, the U.S. Department of the Interior’s Bureau of Land Management (BLM) completed a final environmental assessment (EA) and found no significant impact for removing the temporary ban on issuing new coal leases on federal land. The ban was issued under the former President Barack Obama administration, but President Donald Trump signed an order requiring it to be lifted in 2017.

“Under President Trump’s leadership, the Department of the Interior has ended the war on American energy and coal, which allows local communities to prosper,” Acting Assistant Secretary for Land and Minerals Management Casey Hammond said. “Coal is and will continue to be a critical part of our nation’s energy portfolio and we are committed to the responsible development of our abundant resources and advancing American energy independence, jobs, and economic growth.”

According to the DOI, coal production on federal lands provides nearly 40% of the nation’s coal and it brought in more than $10 billion and supported more than 32,000 jobs.

In March 2017, President Trump issued an executive order, “Promoting Energy Independence and Economic Growth,” which tasked the administration to take important steps to promote clean and safe development of its energy resources, including coal. In response, the department issued Secretary’s Order 3348, lifting the pause that was implemented, allowing the BLM to carry out mandates for coal leasing set forth in the Mineral Leasing Act and Federal Land Policy and Management Act.

The BLM prepared an EA in response to the U.S. District Court of Montana’s Order issued on April 19, 2019, regarding Citizens for Clean Energy et al. v. U.S. Department of the Interior et al. The district court ruled that the secretary’s order constituted a major federal action triggering compliance with the National Environmental Policy Act (NEPA).

On May 22, 2019, the BLM released the draft EA and held a 15-day comment period that was extended to June 10, 2019. Comments were received from individuals, groups, organizations, businesses, elected officials, federal, state, and local government agencies, and tribes.