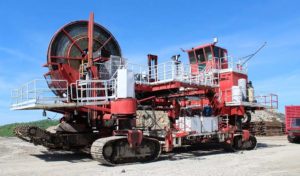 A second unit train of 100 railcars departed from the Ben’s Creek loadout carrying 11,000 tons of high vol B metallurgical-grade coal for delivery to Integrity Coal Sales Inc. A third unit train has been booked, which the company expects to arrive later this month.

“We now expect regular train deliveries of our product to Integrity to fulfil our commitments and therefore we do not intend to announce subsequent rail deliveries as they occur,” Ben’s Creek CEO Adam Wilson said.

Initially, Ben’s Creek had been supplying Integrity with run-of-mine coal via truck as it completed the restoration of the prep plant and the associated railway spur. Following completion, the company built an inventory of clean coal, which it is now delivering, via its 3.2-mile rail spur connecting to the Norfolk Southern railway system, which transports the coal to the port of Norfolk, Virginia.

This is a milestone for the Ben’s Creek project, from the commencement of both highwall mining and underground mining, and the processing of the coal through the restored prep plant, the company said. The mine is located in southern West Virginia near the Kentucky border.

“We have also commenced the second shift on the first highwall miner and are in the process of renovating our second highwall miner, which we purchased earlier this year,” Wilson said. “We expect in due course to receive a new permit for the area that is to be mined using the new highwall miner. The company is targeting to reach full production using both highwall miners by the end of summer 2022.”

During late May, the company said it has started underground mining to produce high vol A (HVA) coal. HVA is higher quality coal and it commands premium price. Spot prices for HVA coal are $468 per metric ton.

Ben’s Creek has proven recoverable coal reserves of 2.34 million tons (comprising the coal reserves at the Lower Alma and Pond Creek mines) and has coal resources of 17.2 million in-place tons with a potential of a further 30.9 million tons.