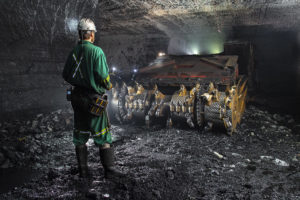 A continuous miner operator checks the bits on his machine at the Greenside Colliery in South Africa.

“We are continuing along that pathway — ensuring a responsible transition — taking care to consider the needs of our employees, host communities and other stakeholders and to continue to nurture our assets through appropriate investment,” the company said in a statement to shareholders.

The demerger is the company’s preferred exit option, but it said it would consider other options as well.

“Our thermal coal operations in South Africa constitute a strong and attractive business with high-quality well-located assets and with access to established export infrastructure,” the company said in a statement. “The operations provide a wide range of economic and social benefits for host communities and for the country, including significant employment, tax revenues, export earnings and the provision of many essential community services.”

In South Africa, it owns four export mines, including a joint venture with Exxaro Resources Ltd., and has a 21% stake in Richards Bay Coal Terminal. The company owns the El Cerrejon mine in Colombia in a partnership with Glencore Plc and BHP.

The company said it will continue to have an ongoing role in responsible thermal coal mining, preferably by companies that recognize “society’s needs and environmental expectations and the vital role that many mines play in their local communities.”

Currently, 15% of Anglo American’s energy needs are met by renewables. Renewables account for more than 85% of the electricity it uses in Brazil, with an aim to increase this to 100% by 2022. In 2019, it signed a contract ensuring that electricity generated exclusively from renewables will power all Chilean operations from 2021.

In related news, an explosion on May 6 halted production at Anglo American’s Grosvenor coal mine in Australia’s northeastern state of Queensland, injuring five people.

The incident is the company’s second, after an accident in February 2019 when a miner died and four were injured at an adjoining complex that halted operations for four days.

“The mine is in the process of being evacuated and operations stopped,” Anglo American said, adding that those injured at its Grosvenor metallurgical coal mine in the central Bowen Basin had been taken to hospital, and their families told.

“All remaining on site personnel have been accounted for,” it said in its statement.