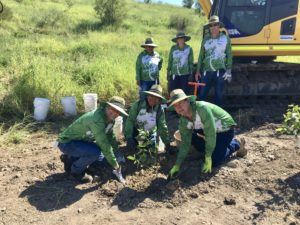 Anglo American and Komatsu announced a new mine rehabilitation partnership that will see more than 9,000 trees planted at Anglo American’s Dawson mine in Central Queensland’s Bowen Basin. The partnership, Growing Together, aims to return mined land to agricultural use, and support the reestablishment of native plant species using the latest reclamation methods, according to the companies.

It commenced with employees from both companies working together to plant more than 4,000 trees at the Dawson mine last month. They were joined by around 40 students from Moura and Banana state schools and traditional owners from the Gangulu Nation. Together, they demonstrated sustainable mining practices in action, planting various native eucalyptus species across a 90-hectare site where mining activities have ceased. 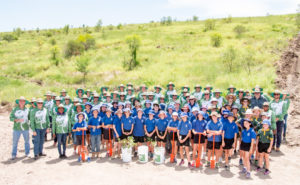 “Collaboration across our industry and the communities where we operate is a powerful way to achieve improved sustainability outcomes in the local area,” he said. “We’re committed to the highest standards of environmental performance, and this new partnership with Komatsu adds to our existing $162 million rehabilitation investment across our five Central Queensland mine sites.”

More than $80 million will be spent on rehabilitation from 2019-2023, according to Mitchelson. 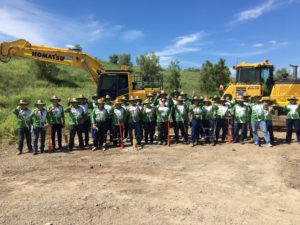 “We were very pleased to welcome students from Moura and Banana state schools to Dawson mine to help share information about native plants, mine rehabilitation and have them join in with our tree planting event,” Mitchelson said. “Schools were also given free plants to take back and plant, so we look forward to seeing more native trees growing across the region.”

The planting included a pilot of biodegradable COCOON planting technology, which reduces the need for irrigation, to  help drought-proof the newly planted trees. The Cocoon pods require 100 times less water than traditional methods and can support a young plant through its critical first year with an accessible reservoir of water and moisture.

President and CEO of Komatsu Mining Corp. Jeffrey Dawes said the new partnership is a continuation of Komatsu’s Growing Forward signature environmental initiative, the reforestation of formerly mined lands, which was launched on Earth Day 2019 to advance the company’s commitment to a sustainable future for all.

“We believe that maintaining high environmental standards is more than a good business practice, it is a fundamental responsibility owed to our employees, customers, communities and the environment we all share,” Dawes said. “We are proud to be working together with Anglo American and members of the local community as we expand our global focus on reforestation of formerly mined lands.”

The Growing Together partnership continues Komatsu’s existing reforestation efforts with Green Forests Work (GFW), a non-profit organization dedicated to promoting proper mine reclamation methods and the restoration of natural habitats, including national forests. As part of those efforts, Komatsu is committed to reforesting 1,000 acres of land and native ecosystems in the Monongahela National Forest in West Virginia, USA. By the end of 2020, that project will have enabled the planting of more than 150,000 trees and creation of more than 100 wetlands to support natural wildlife habitats.

“It’s an honour to be partnering with Anglo American, who are global leaders in sustainable mining, to increase the use of advanced mine rehabilitation methods and complete the cycle – bringing the land back to its original use following the extraction of essential minerals needed to grow modern society,” Dawes said.

The Growing Together project is being undertaken in coordination with environmental consultants from Australian firm EMM, and support from Anglo American’s rehabilitation contractor, Moorvale Earthmoving.