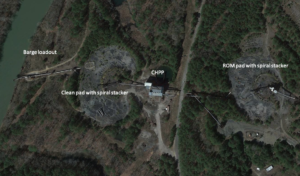 Allegiance Coal Ltd. has entered into an agreement with Drummond Coal to acquire the Short Creek mine, located west of Birmingham, Alabama, which will further consolidate and complement its investment in Alabama and Colorado. The acquisition cost consists of $4.4 million in cash to Drummond and related entities to acquire the land and assets; and $11.5 million to replace the reclamation bond with the state of Alabama that follows the land and assets.

“Short Creek is a tier one asset,” Allegiance Chairman and CEO Mark Gray said. “It has scale, exceptional coal quality, and provides Allegiance with a long life mine delivering premium CSR coking coal to the seaborne market.”

The acquisition will also position the company alongside major coal producers in the Black Warrior Basin, including Peabody, Warrior Met and Javelin Commodities, he added.

“It both complements and consolidates our investment in Alabama coking coal and sets a pathway to Allegiance becoming a producer of a variety of U.S. coking coals from New Elk, Black Warrior and now Short Creek,” Gray said.

The acquisition will be completed when Marshall Miller & Associates delivers a JORC compliant resource statement and upon completion of the transfer of land and fixed assets, existing permits, and the coal lease to the Mary Lee, Blue Creek and Newcastle coal seams.

While mine permits exist and are in good standing for open-pit production and the operation of the wash plant and the barge load-out, Allegiance will have to permit the underground mine estimated to take six to nine months after completion of the acquisition.

The acquisition from Drummond includes the purchase of the land over the deposit, the fixed assets (primarily a prep plant, a barge load-out, conveyors and stackers), and all existing permits to operate; and the lease of the mineral rights to the Mary Lee, Blue Creek and Newcastle seams up to 23 years, in consideration for the payment of royalties ranging from 7% to 10% based on a sliding scale of the FOB sales price achieved.

Allegiance has raised A$30 million ($22.5 million) through a share placement, which will be applied to the acquisition, to advance the Short Creek mine into development and to working capital.

DOE to Give Out $100M for Coal FIRST Initiative

BMA to Sell Gregory Crinum Mine in Australia