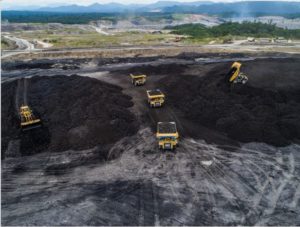 Indonesia’s second biggest coal miner PT Adaro Energy Indonesia Tbk ADRO.JK said on Monday, April 25, it has shipped roughly 300,000 metric tons (mt) of coal to some buyers in Europe, where countries are seeking a new source of the fuel due to sanctions on Russia. The coal was sold via the spot market, Chief Finance Officer Lie Luckman said, but added the company would continue to focus on its longstanding customers, as reported by Reuters.

“Indeed, there has been some demand from Europe, but our market is mainly Asia,” Luckman said. “We will focus on fulfilling our commitments to our customers who already have long-term contracts with us.”

Demand from Europe would likely increase, but markets such as Japan, China, South Korea and India, which are among Adaro’s biggest buyers, would remain priorities, he said.

Earlier this month, the European Union imposed sanctions on Russia over its invasion of Ukraine, which included banning imports of Russian coal from mid-August.

Luckman said the firm had sold to buyers in the Netherlands and Spain.

Despite higher prices, Luckman said it was too early to increase the firm’s production plan. The company’s 2022 output guidance was 58 million to 60 million mt.

“We focus on keeping our production going. We don’t want any production disruption in the middle of these difficult conditions,” Adaro Chief Executive Garibaldi Thohir said.

Judge Rules in Favor of Environmental Groups Over Coal Moratorium