Last month at the Longwall USA Conference & Exhibition in Pittsburgh, Pennsylvania, Coal Age presented the Top Performer Awards to four U.S. longwall mines. The awards winners were selected based on the mine’s overall safety performance during the intervening years (2017 and 2018 in this case), along with average raw longwall production per day and the mine’s total production. Using data from the U.S. Longwall Census published in the January-February 2019 edition of Coal Age, all the U.S. longwall mines were subdivided into three categories by cutting height: high (96 inches and greater), medium (72 to 95 inches), and low (71 inches and less).

As far as safety is concerned, the Mine Safety and Health Administration’s (MSHA) average incident rate for underground coal mines was 3.13 and 3.70 for 2018 and 2017, respectively. All of the winners were below the industry average and some of the winners were way below the industry average. The four winners all produced more than 4.8 million tons per year (tpy) and averaged more than 31,800 raw tpd. Some of them produced considerably more than that. 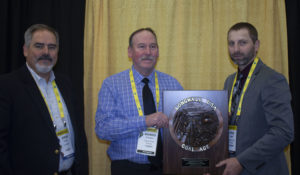 The competition was very close in the medium range, so this year Coal Age presented to both Tunnel Ridge and Sugar Camp mines.

Foresight Energy’s Sugar Camp mine in Illinois produced 14.46 million tons and 12.81 million tons in 2018 and 2017. They had an average daily raw production rate of more than 50,000 tons and 45,700 tons. Sugar Camp operates two longwalls and the other face had an average daily production rate of more than 45,600 tons. They had an MSHA incidence rate of 1.03 and 2.89. Congratulations to the Sugar Camp mine.